moo9 months ago
HAPPY BIRTHDAY to our other glorious leader... Andre! Hope you have a nice day!
shaeve1 year ago
just a quick one, is it possible to fit a graphite neck to a 5 string groove?
witterth1 year ago
I cant seem to add a photo of a 2000 I was wondering if I could get some pickup covers for a 2000 seial no 370 so its an old one any ideas Guys?
MARTIN WEBB1 year ago
Getting very excited as my first S2 is due today.
Shoutbox Archive
Navigation

I bought a very pretty S1 Classic 5 strings fretless in 2003: 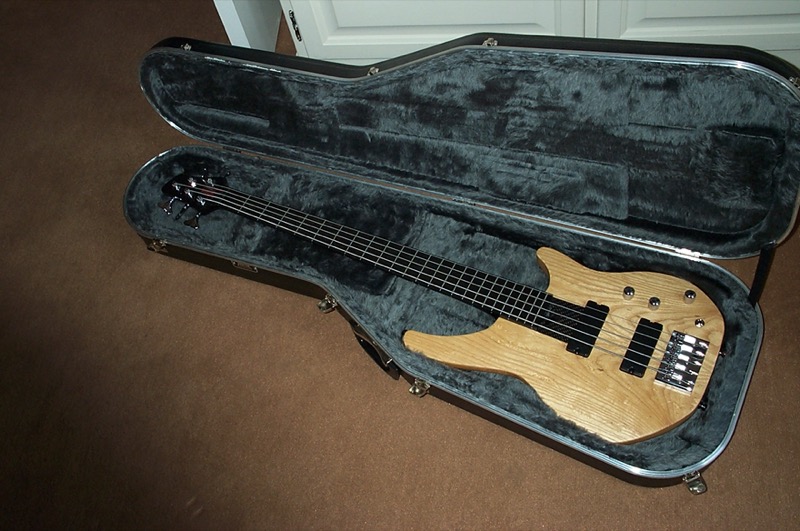 It plays and sounds great (I had Dominique Di Piazza try it during a masterclass and he was amazed), BUT I've always been frustrated by the lack of control I could get with its 'simple' active circuit : volume, pickups balance and treble cut/boost. The lows on this bass are HUGE and on all my other basses I also love being able to adjust some mids depending on the room and band. The lack of mids control is even more frustrating on a fretless, all the color of its voice can be tweeked in the mids.

So, I've been waiting for years (nearly 20 actually) and re-evaluated recently some active circuit replacement options. I was considering a markbass preamp but was a bit scared by all the wiring (I'm not an expert in electronics) and finally order a board 303 directly from Rob and Dawn after getting Rob's confirmation that the upgrade from board 100 to a board 303 was quite simple.

Indeed, the board is the same size, the existing pots placement are the same, the re-wiring is the same and the pots are already soldered to the circuit.

I ordered the circuit beginning of February and received it in France 10 days later... with the additional customs taxes (73€), thank you Brexit.

I started with removing the original board without unsoldering it and placed the new board to be able to mark the spots for the new holes. A 8mm drill was perfect for the pots : 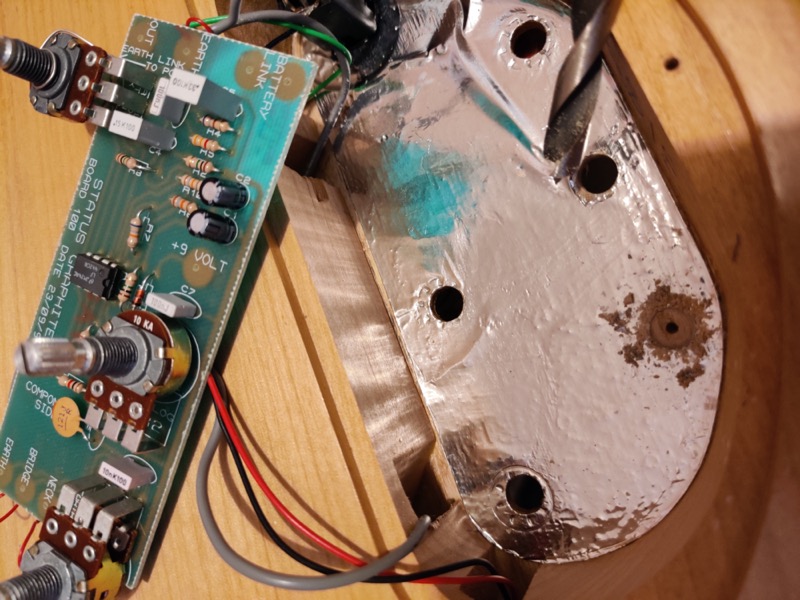 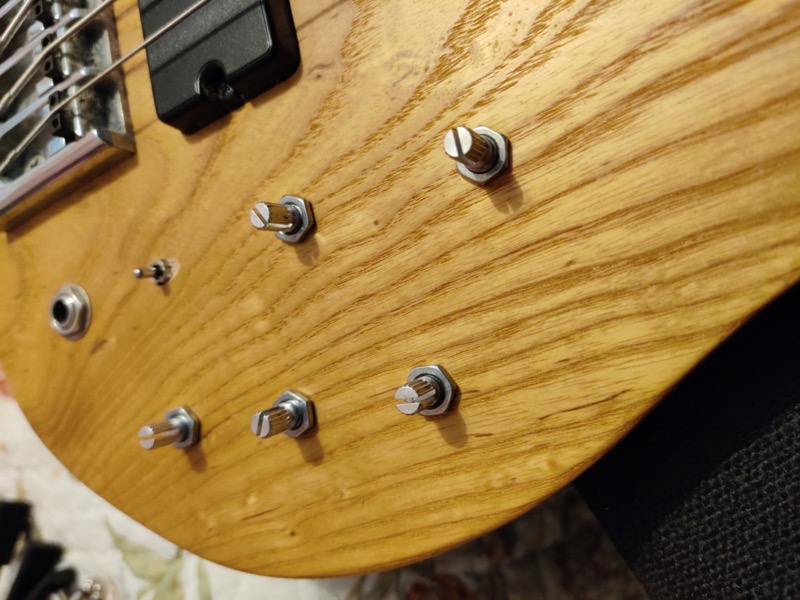 I measured the mids cut/boost switch at 6mm so I used a 6mm drill for this one. It occurred that this new hole was not perfectly centered so I had to enlarge it and while doing this a chip of wood got off of the top wood

. I was expecting this actually as I was drilling from the inside of the electronics cavity and I'm quite happy that it's the only visible damage I did so far...

So far, the new board is now ready in the cavity but it's still the old board that is wired: 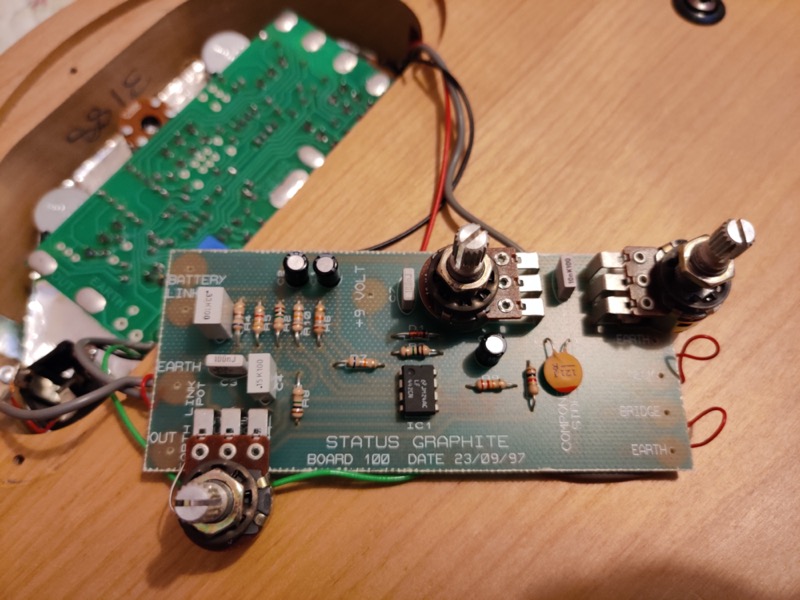 I was a bit anxious about the soldering phase but it was actually really straightforward:
* Each pickup has its dedicated hot + earth spots pair on the board
* 1 "+ volts" spot for the battery (the - wire stays on the jack plug)
* out + earth to the jack plug
* a bridge green wire on an earth

Everything is clearly written on the soldering side of the board and all the soldering spots are already prepared with tin, you just have to put the wire on it, apply the iron instantly melts the tin and fixes the wire. No need for additional metal on the solder. 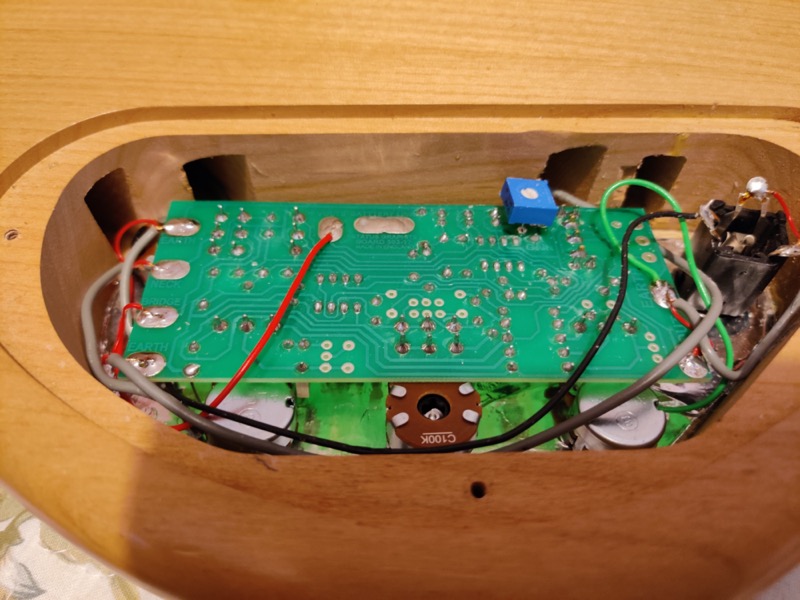 Now, I thought I was done. But that's where it gets a bit crazy.

Now I'm in this situation: 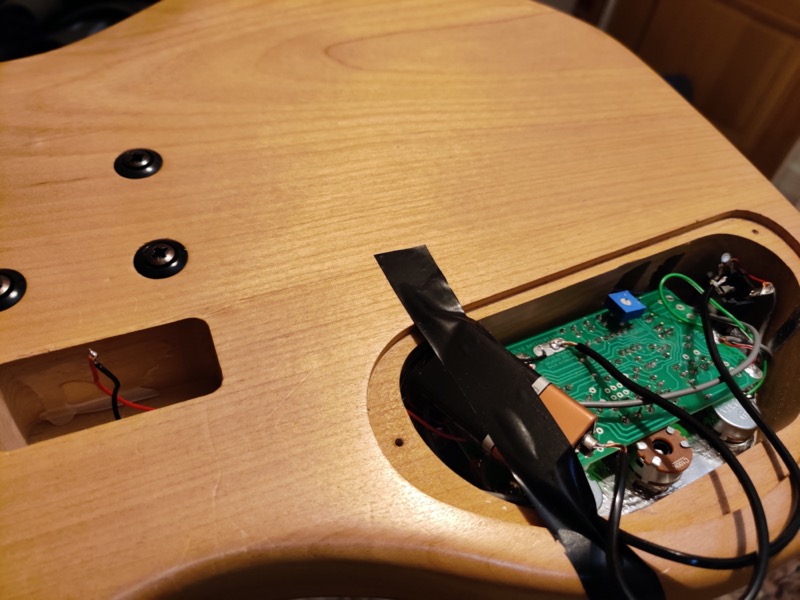 What would you do ?

Rogiarte
Junior Member
Posted 9 months ago
#2
1-- change the battery box if that is not dificcult for you , and you sure the final wood work will be Good, this EQ are prepared for 18V
or
2--if you newbie in working on wood, maybe is better not to try to open space for a bigger battery box, use just one battery, this EQ board also good work with 9v, they are prepared for 9v also
or
3-- if you really want 18v without open a hole in the wood , easy way is to put 2 battery , i mean, 1 battery in the Battery box, and the second near to the the EQ board ,offcourse if have space there to put the battery
( you have to put some king of isolation between the battery and the Eq circuit.)
nivek
Junior Member
Posted 9 months ago
#3
Hi Rogiarte,

I feel like the woodwork is doable with the help of my Dremel and wood carving bits I already have. 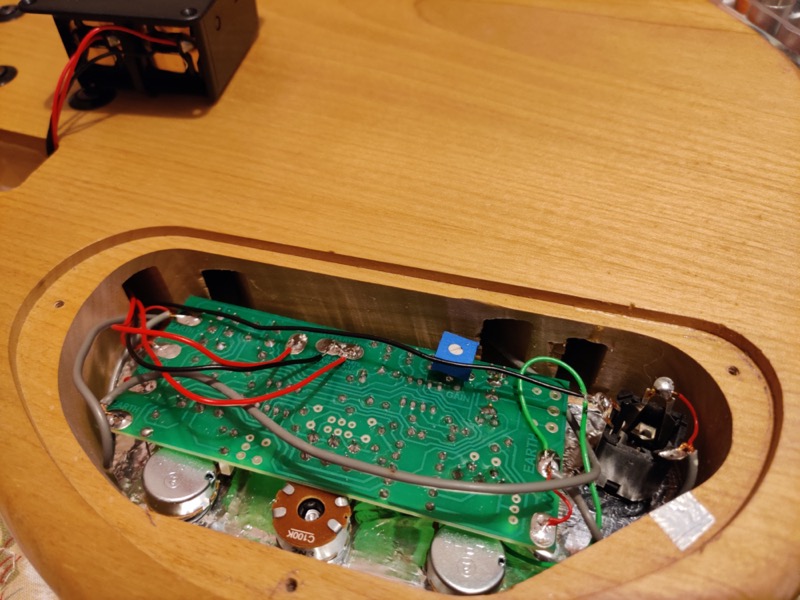 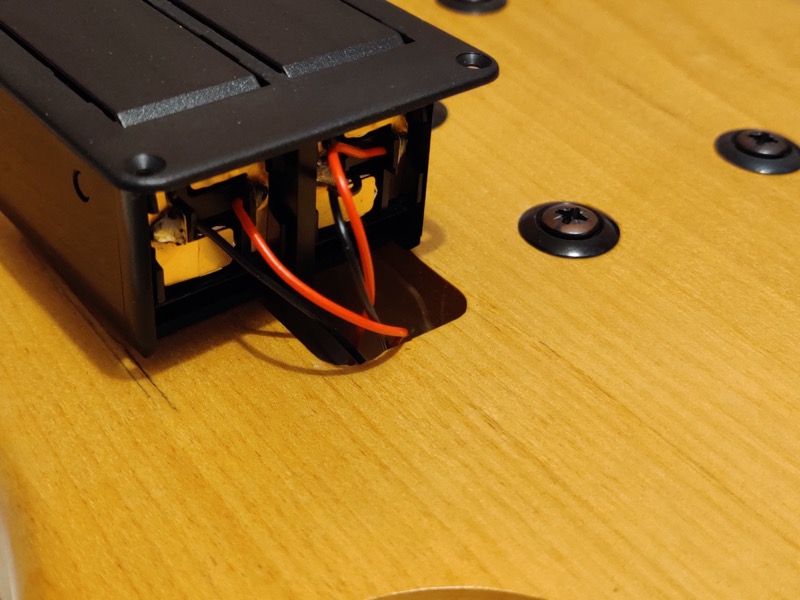 Next step: enlarge this hole.

Additional benefit of the electronics upgrade : I can now adjust the output gain to match my other bass!
Edited by nivek on 22-02-2022 11:07, 9 months ago
Rogiarte
Junior Member
Posted 9 months ago
#4
Nivek you have a good sound , that nice, make the hole :-)

and show us the final work
nivek
Junior Member
Posted 9 months ago
#5
Done: 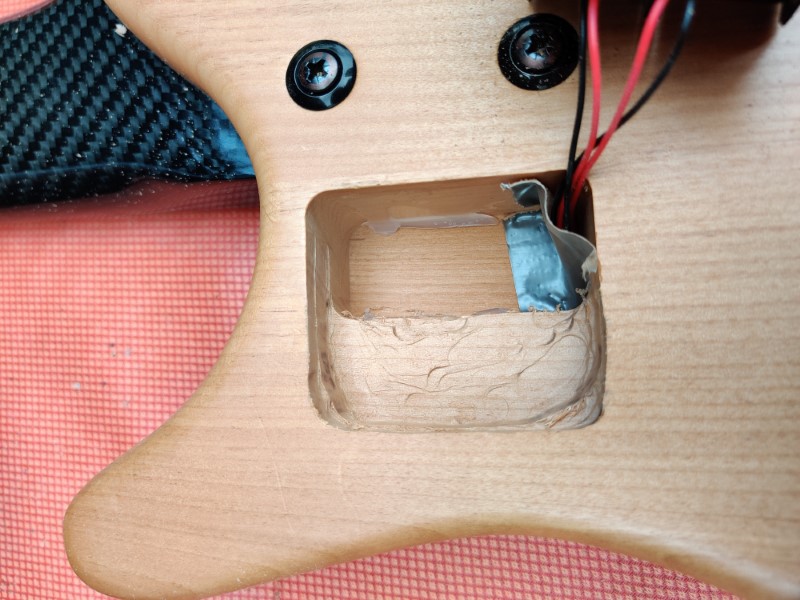 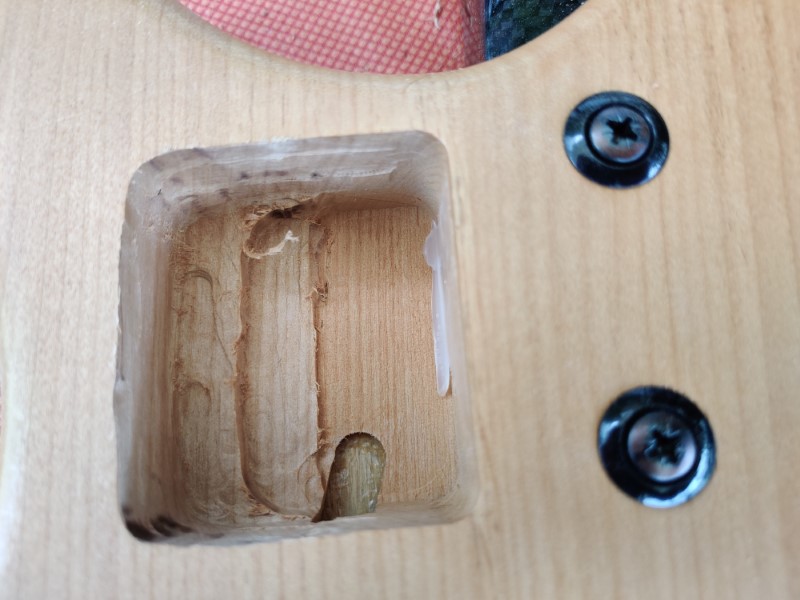 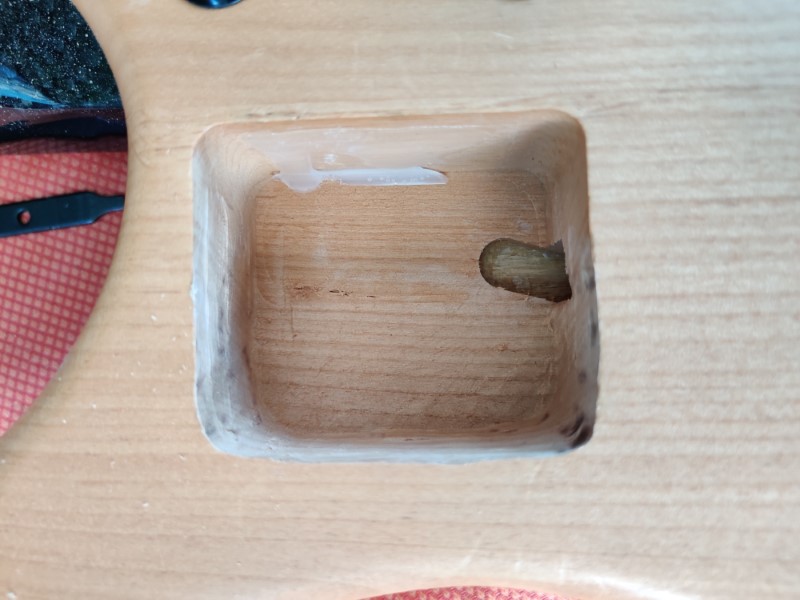 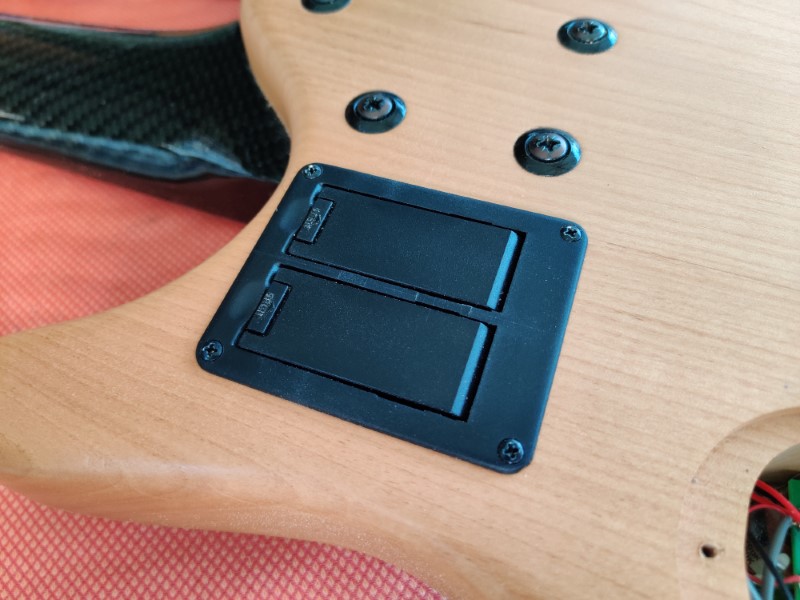 Next step : record and post some sound ;-)
nivek
Junior Member
Posted 9 months ago
#6
Tonight I worked on Blue In Green:
https://soundcloud.com/kevin-gaudin/b...e-in-green
I added the 2 bass lines with the S1 to a backing track I found on youtube (https://www.youtube.com/watch?v=VfXm0...fXm0N2Wd78)
Bass direct in the interface (Scarlett Solo), a light reverb with a plugin in Reaper.
This is definitely not a single take.

Oh and I forgot to send a final front photo with the new knobs (I had to buy new ones from Thomann as they were not included with the new circuit). 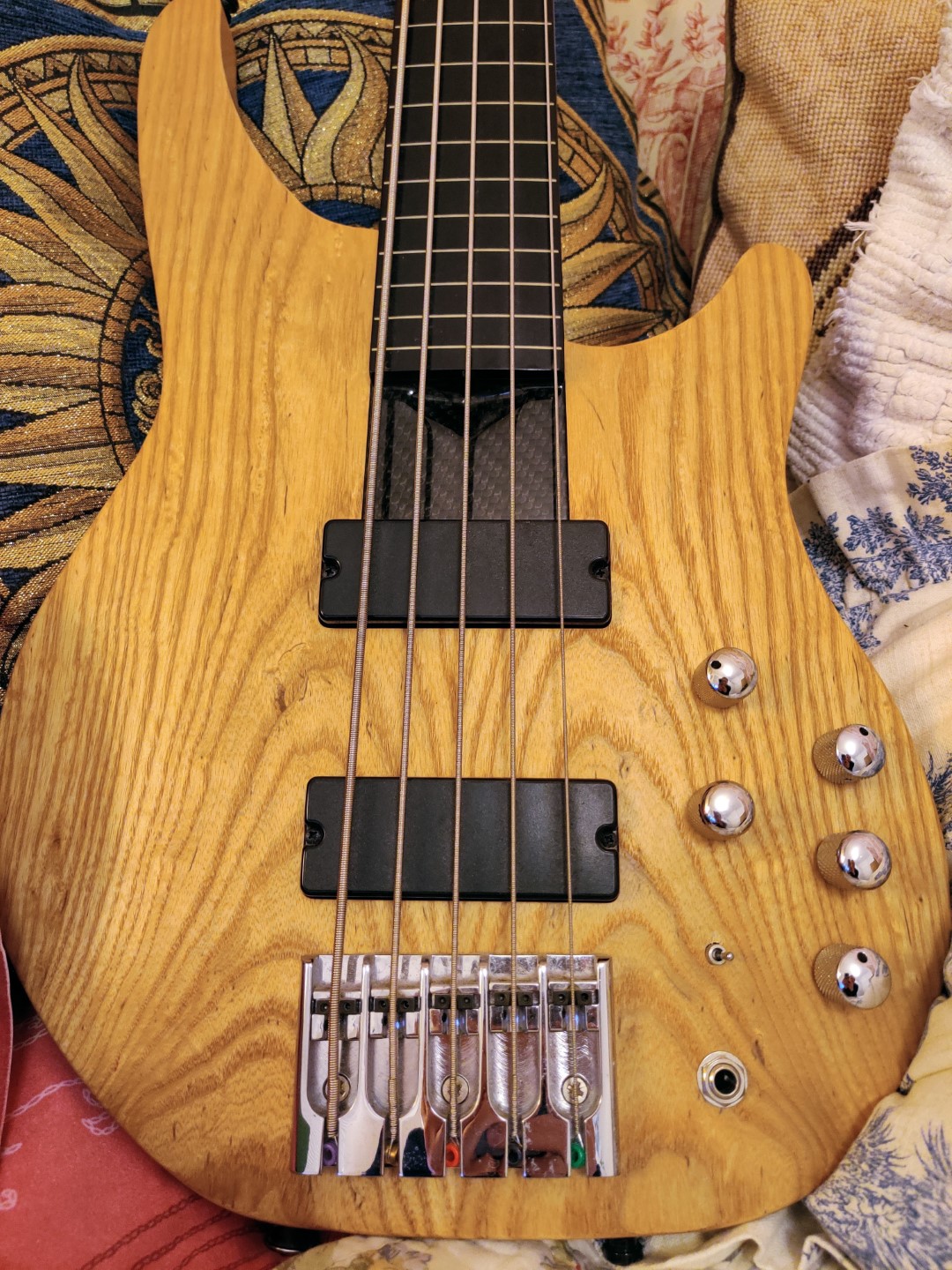